Randomness is often genius in disguise...

When I saw my chocolate cupcakes all ready to go into the oven, something came over me and I impulsively threw in some chocolate chips and coconut.
"What could this hurt?" I thought. The combination of flavors and textures at the very least would be interesting. But the end result was all that... and more! 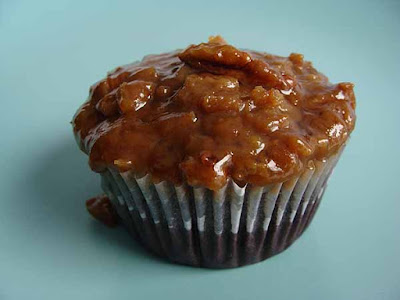 Delicious perfection. A new Frosted flavor is born! Double chocolate coconut. Then I invented a gooey toffee frosting with toasted coconut and pecans.
It was love at first bite. 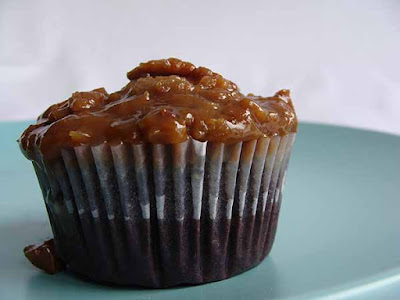 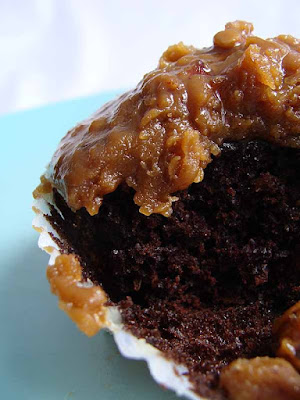 I was minding my own business and watching The Cake Boss on TLC when all of a sudden I see Buddy (the owner of Carlo's Bakery and star of the Cake Boss) putting together a German Crumb Cake for one of his customers.

This is not unusual for any of you who know me. I often get urges to do things that seem ridiculous or impossible and I have virtually no fear in trying. :) How can we ever know what we are capable of if we don't try? And, the way I figure it, at least I will have a blast, even if I fail in my effort!

So, to the kitchen I went, with an assortment of recipes I found in cookbooks and on the Internet. I collaborated with myself and decided to tweak a few I found and merge them into one.

German Crumb Cake take one was "OK", but certainly nothing to write home about. "Well, this is boring." I thought. "Maybe crumb cake is supposed to be boring? hmmm.."

But I wasn't giving up.

German Crumb Cake version two was better, but too 'bread like' and it was WAY too thick.

But I had hope! the crumb topping was PERFECT and I had an idea of what I could do to get the perfect cake.

The magic number was three for this cake and I'm hanging up my apron for today and enjoying my own piece of the sugary, crumbly comforting goodness: 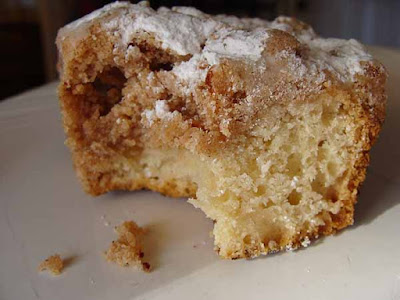 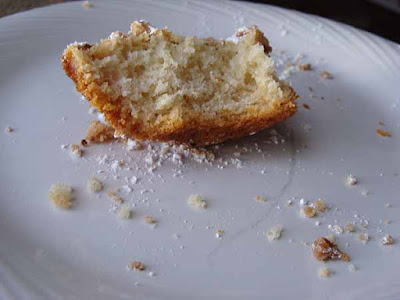 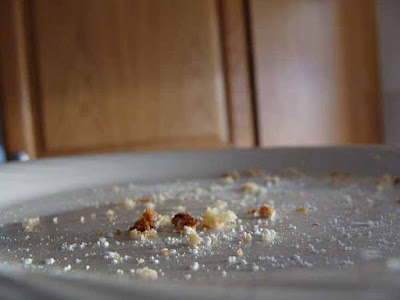 And for one of the rare moments in Frosted history, I will share with you the recipe. :) Enjoy!

*You will need a bread machine to make this recipe. (Unless you want to be adventurous and attempt the yeast cake part on your own in which case, please post here how you did and let us know how it turned out!)

Mix egg and warm milk together. Stir in vanilla. Pour egg mixture into bread machine pan (already positioned in machine). Carefully pour in flour, making sure it covers all of the liquid. Make an indentation in the middle of the flour, making sure that the indent does not reach the liquid. Put the yeast in the center, in the indentation. Pour sugar carefully in one corner of the pan, and salt in the opposite corner. Place tablespoons of butter in the last two corners, opposite of each other. Close lid and start bread machine on the basic setting. Allow it to go through one stage of mixing, then a stage of rising, then another stage of beating/mixing and a second stage of rising. (My machine ends this at 1:55. In other words, you only want your dough to be beaten down once in the machine, but able to rise that second time.)

Remove dough from bread machine and unplug your machine.

Grease a 9 x 13 pan. Using your hands, spread the dough in the pan. Cover the pan with greased plastic wrap. (I just lay down saran wrap and spray it with non stick cooking spray). Do not press the wrap onto the dough, just cover the pan itself and seal the edges- give the dough room to rise. Place in the oven on the warm setting (about 100 degrees). Place a pan or glass dish filled with boiling water on the bottom shelf. Allow dough to rise 1 1/2 hours.

Mix the dry ingredients of the crumb topping together until evenly blended. Add vanilla and cut up the butter. Using a food processor, or your hands, mix together until the topping looks like crumbs.

Remove dough from oven. It should have almost doubled in size. Remove the pan of water and preheat oven to 350. Take off plastic wrap. Grab clumps (handfuls) and gently press into top of dough. Then sprinkle topping over dough so that the entire top is covered.

Bake for 30 minutes or until knife inserted in the center comes out clean and top is nicely browned.

Allow to cool. Sprinkle generously with powdered sugar. Cut in squares and serve with your favorite coffee or tea. Enjoy!