When life gives you lemons...

In the middle of the cold winter (that threatened to never leave) I decided to make lemon meringue cupcakes! I had never tried this before and wanted to do something different. This presented well and tasted light and fluffy. The lemon curd filling was the perfect blend of tart and sweetness. I had some difficulty figuring out the meringue topping but it all worked out in the end! 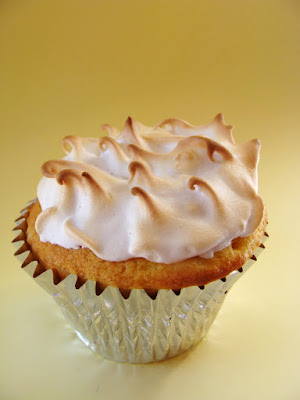 I have the urge to name these: "Sunny Day Cupcakes" but is that too corny?
hmmm... on a cold and cloudy day it is just right! 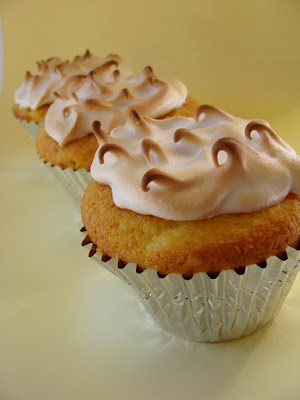 In the World of Cakes...

there is one illusive and beautiful classic that is a must have on any baker's menu.

She is distinct and mysterious. Her exact origin is unknown. Although commonly attributed to the southern states, it is the historic Waldorf Astoria in New York City that served the Red Velvet to guests in 1930 that caused it to first rise to fame. The recipe varies from source to source but everyone seems to agree that a rich red color is a must. I like the mysterious hint of cocoa in my recipe and a moist dense crumb that feels like velvet on the tongue! 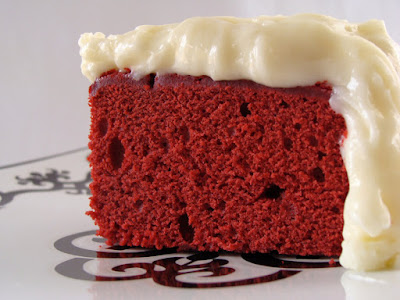 I am perhaps my own worst critic.
Sometimes, I get a recipe to meet my standards on the first or second try. But that is rare. I actually went through four versions of the lady in red and each one was unique in its own way.
For now, I've settled on version #4.
I gave her cream cheese frosting and a sprinkle of crumbs to distinguish her and reveal the scarlet interior that was waiting beneeth her swirls of creamy topping. 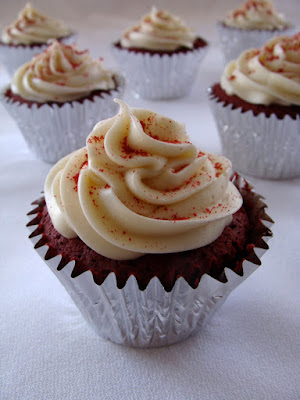 She may seem unnassuming at first, but after unwrapping her, I'm sure you will find her infectious and delightful at first bite!
Posted by Julie at 5:23 PM No comments: